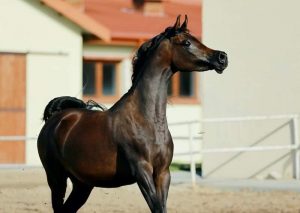 Young dark bay mare, born in 2015, bred by the Michalow Stud during their lease of Vitorio TO from America.

We congratulate her breeder as well as her new owners.
We also say thank you to the photographer Sylwia Ilenda for this great shot.

Wieza Czarow, which means the Tower of Spells in Polish, threatens to take on international show arenas, just as her half-sister *Wieza Mocy did, and did it well indeed. We wish Wieza Czarow, her handler and of course her owners, the very best of luck.